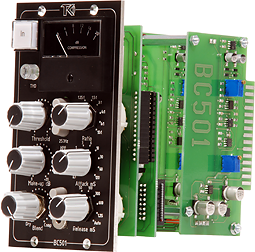 The BC1-S provides smooth buss compression associated with one of the most famous buss compressors from the mid 80′s. Mixing engineers call it the magic “glue” when transparent compression strengthens mixes without compromising clarity. The BC1-S provides just that kind of compression bringing cohesion and punch; equally useful for drum buss and instrument compression.
The built-in blend control makes it easy to apply parallel compression by adjusting the mix of dry and compressed signal. A mute-switch is provided for muting the dry signal making it possible to adjust the compression without changing the blend control.
A switchable side-chain filter can be applied at 150Hz which makes the BC1-S less responsive to low frequency energy. The external side-chain input makes it possible to have the BC1-S pump to an external source.
Smooth and transparent compression will never go out of fashion and the BC1 has already become a best-seller. The BC1-S will add the magic “glue” and make your mixes sound punchy and coherent.
To make it even more easy to work with we have now changed all potentiometers for detendet (stepped) controls for easier recall.

Everybody taking a glance at the BC1-S will be reminded of the SSL G-Bus compressor.
However – different from other protagonists such as the Alan Smart C1 and various DIY models so commonly found on the net the BC1-S is everything but a clone – neither really trying to be one.
It is true that both layout as well as basic features are very reminsicent of the classic SSL design. But TK has added some important features such as a Low Cut in the sidechain, parallel compression on board, denting and added attack and release time to make the BC1-S compatible with today’s style of mixing.
It’s also true that the original G-Bus – particularly due to the lack of the sidechain Low Cut – does no more suffice in most of todays applications. The G-Bus after all was desgined to fulfill the needs of engineers still mixing for vinyl records. Mixes of the day had no where near the amount of low end than your average mix does these days.
But it’s also the basic sonic characteristics that separate the BC1-S from the G-Bus.
I would describe the BC1-S as having “more weight” than the G-Bus. It’s not a compressor on steroids – and for master bus that’s a good thing!!
The BC1-S will therefor produce a considerably larger and bigger sound than the G-Bus, never wreaking havoc with your mix  – which the G-Bus has a tendency of doing.
It is indeed gentler in its behaviour. You will also notice that the release curves are considerably more musical and much more apt for todays rhythmic arrangements.
Now – would I swap my BC1-S for the far more costly G-Bus?
No way.
At some point a couple of years back I owned something like three G-Bus comps.
Kinda happened.
I sold the last of the three shortly after I first heard a TK Audio BC1.